I thought this was a great post... I don't see how any cooling off is happening... it feels more like a "hold teacher's unable to take any action while we hit them with bill after bill after rule to get our way"


Cooling off Period??? Following the passage of Bill 22...


The Christy Clarke Liberal Government ordered a 'cooling off period' for teachers after they passed Bill 22 that ended our Phase 1 job action. However, the following actions from the government indicates that they have not cooled off very much! First, there were two Ministerial Orders:

Class Size and Compensation Regulation - the 'cash for kids' program that excludes entire groups of teachers and then places a price tag on student's head teachers forced to enrol them in their program.

Based on Bill 22's narrow language, a mediator chosen by the BC Christy Clarke Liberals - Dr. Charles Jago is chosen as the mediator even though he has no experience as a mediator and no experience with K-12 education in BC. The BCTF has concerns about a 2006 report on public education in BC done by Dr. Jago on commission to former Premier Gordon Campbell’s Progress Board. The report’s findings clearly foreshadow positions taken by the BC Public School Employers’ Association at the bargaining table and also reflect policy directions laid out in Bill 22.

Bill 36 - 2012 - School Amendment Act - Promotes online courses for students as young as four, puts sweeping powers in the hands of the Minister of Education - school calendars, hours of instruction, and allows for fees for 'costly' programs.

LRB Ruling - Report cards and Struck Work - BCPSEA ensures that teachers must do Term 2 reports and our Board demands specialists reports to accompany them.

Bill 25 - Miscellaneous Statutes Amendment Act - attempts to limit third party activity from 60 days to 40 days and allows for a minimum window of three weeks after the legislature rises in which there is no limit on advertising - another attack on our Charter Rights to freedom of speech and expressions.

LRB Hearing - Extra Curricular/Voluntary - BCPSEA is attempting to dictate what we must do in addition to teaching, on our own time. 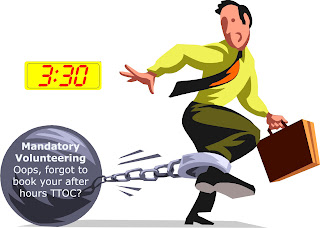 The BC Christy Clark Liberals Cooperative Gains Mandate - It equates to no money or benefits offered by the government, but if teachers wanted, they could sacrifice their own hard won benefits to get modest salary increases.

Feeling 'cooled off' yet? Neither do we!
[Source]
Posted by MsAmandaLong at 23:20