I have done a similar activity before. Students had to create an animal that had adaptations suitable for the biome they chose. This is a neat version of this where students take two animals and create a venn diagam to morph the two together, including their name and features. 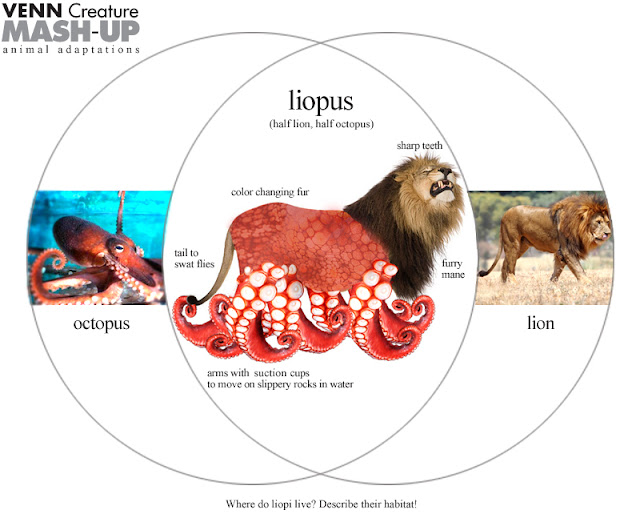 Posted by MsAmandaLong at 11:20 No comments: 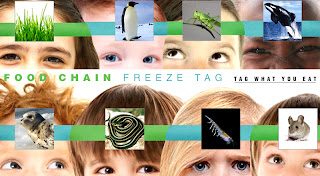 This activity is inspired by Eecko World's "We're All In This Together." Rather than having kids play tag using organisms from a single food chain, make it more challenging by adding a variety of food chains!


Give each child a construction paper headband with a different plant or animal that is part of a food chain (include organisms from different habitats). Take students to a large open area outside. Kids have to look for a plant or animal that their organism consumes. They tag what they eat! If a child is tagged, they must freeze (stand still)! Who is left at the end of the game?!
Afterwards, have kids try to find organisms that belong to their habitat (creating small groups). Kids must problem solve and try to figure out who belongs in their "group." Also, where would you find the organisms in their group? What habitat do they live in?!

Posted by MsAmandaLong at 11:14 No comments: 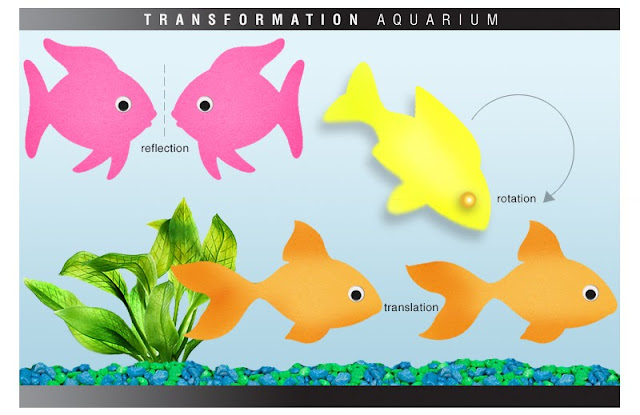 Love this. My daughter is doing this in school right now (though she is in French Immersion so the terms are en francais) so we just did some demonstrations of these different transformations.
Posted by MsAmandaLong at 11:11 No comments: 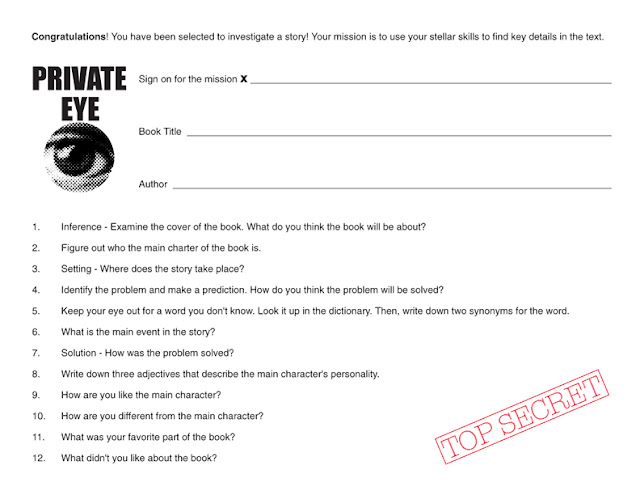 Source
Posted by MsAmandaLong at 10:49 No comments:

Posted by MsAmandaLong at 09:51 No comments:

Posted by MsAmandaLong at 20:48 No comments:

Push and Pull
Introduction to physics: Children are exploring how things move in the world around them. They will investigate how they can change the speed and direction of objects by exerting more or less strength. 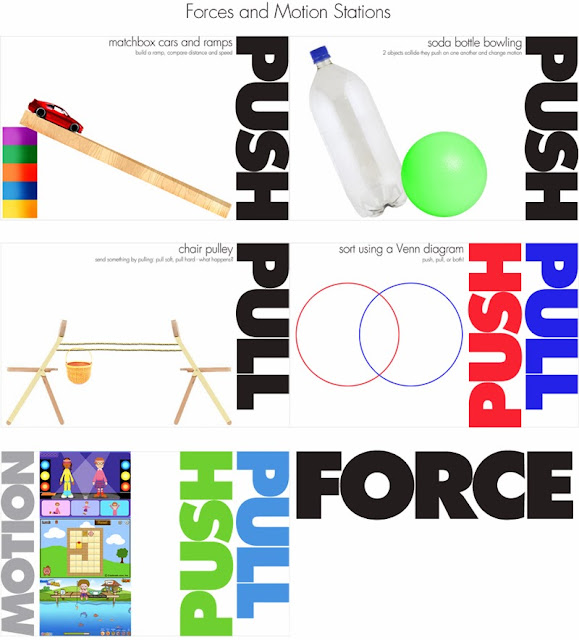 Introduction (Whole Group):
First, connect motion to what the children already know. Ask them, How do we move? Have children raise their hand and demonstrate. Next, drop a stuffed animal on the ground. Ask students, How can I make the stuffed animal move? They will think about their past experiences with moving objects to derive an answer. Then, explain that a push and a pull are both forces. Force makes an object move or stop moving. When we push something, we are moving it away from us. When we pull something, we are moving it closer to us. [Act out motions: push = palms out, push away from body and pull = two fists on top of each other, pull toward body with students]. Brainstorm: Create a T-chart, write down objects that can be pushed or pulled (objects at home, in the classroom, on the playground).

Small Group Instruction (Stations):
PUSH: Soda Bottle Bowling: Children experiment with pushing a ball hard and soft to knock over soda bottles. They can compare a big push to a small push. What kind of push made the ball move the fastest? They will see how when objects collide (ball and soda bottle) they push on one another and can change motion.

PULL: Chair Pulley: Loop a light weight rope around the back of two chairs. Hang a small basket within the loop to send back and forth by pulling. They will experiment with pulling the rope hard and soft. What kind of pull moved the basket the farthest?

PUSH: Ramps and Matchbox Cars: Children create ramps using flat, rectangular wooden blocks and duplo legos. They will investigate how the height of a ramp can change how fast and far their matchbox car can go. They will also compare the distance and speed of the car on the ramp to using no ramp.


Watch a video to reinforce pushes and pulls.


For further reinforcement, the next day, have children go on a scavenger hunt and try to find things around the classroom that they can push and pull.

[Source]
Posted by MsAmandaLong at 11:03 No comments: 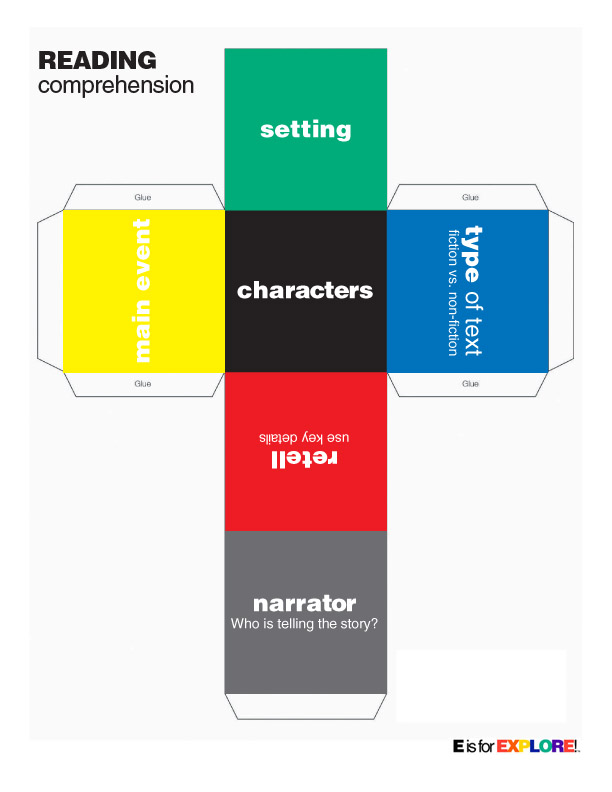 Source
Posted by MsAmandaLong at 10:47 No comments:

source
Posted by MsAmandaLong at 10:45 No comments:

Posted by MsAmandaLong at 13:49 No comments:

This amazing library display features a line-up of literary characters from books that have been banned at one point in time. Created by Rachel Moani of the Lacey Timberland Library in Washington state for Banned Book Week, it highlights a few of the reasons the books have been banned by either a school or community library, such as "The Wizard of Oz" for depicting women in strong leadership roles and "The Diary of Anne Frank" for being too depressing.

Banned Books Week is an annual awareness campaign sponsored by the American Library Association and others in the book community every September to celebrate the freedom to read and expose the dangers of restricting access to books. The banning of books, at least in the US, occurs on a local level, generally by local school districts which decide to pull a book from school libraries or classrooms. Often a book that is banned in one school district is a core part of the curriculum in many others.

[Source]
Posted by MsAmandaLong at 21:19 No comments:

The Latest in BC Education

The latest with BC education, BC Budget, Christy Clark and the court case....

Families not first in BC Budget
http://globalnews.ca/news/1157346/families-not-first-in-british-columbia-budget/

Liberals Must Negotiate with Teachers
http://www.timescolonist.com/opinion/columnists/les-leyne-liberals-must-negotiate-with-teachers-1.856887

Posted by MsAmandaLong at 11:17 No comments: 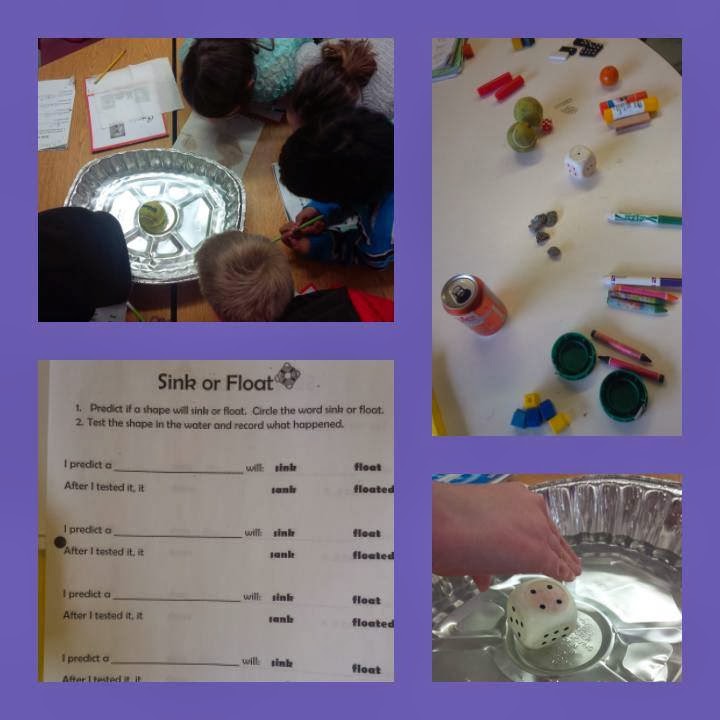 I loved this lesson. It would be easy to do as a TTOC or if you found yourself with some extra time and not enough planned. Of course, having the tubs, items and worksheet makes it easier, but students could also write out statements on lined paper.

First, they PREDICT if an item will SINK or FLOAT.
Then, they put the item in the tub of water to OBSERVE.
Next, they write down their results - did it SINK or FLOAT.

After each student chose an item, the entire group would predict, then observe. Each student had a chance to choose an item to test. At the end, they all wrote sentences to explain why they thought things would SINK or FLOAT.

They were all engaged, it got a bit splashy at times, but they were reminded to be cautious not to get their DATA SHEETS wet and ruin their findings.

What a fun lesson!

Posted by MsAmandaLong at 09:38 No comments:

Today I was a Teacher-Teaching-On-Call [TTOC] in a Grade 2/3 class for the afternoon. Right after lunch we had science and as students wrote their predictions, I noticed a young boy with brightly painted red nails.

I said, "love the nails, did you see mine?" (I have pink flowers painted on mine and showed him) he said, "nice, I had red lipstick to match my nails on the weekend"

another boy sitting nearby said, "my mom won't let me wear nail polish, or lipstick" I asked, "How come?" he said, "no make up for me or my sisters until high school"

I smiled, "that seems fair, I have the same rule in my house" ha ha - love it!

Posted by MsAmandaLong at 19:27 No comments:

When I was job sharing with a friend of mine a couple years ago, we were both teaching Shakespeare and did an opening to the unit that involved creating "Shakespearean insults"

So, when I saw this on facebook today, I just about fell out of my seat laughing.... too funny!

Posted by MsAmandaLong at 14:47 No comments: 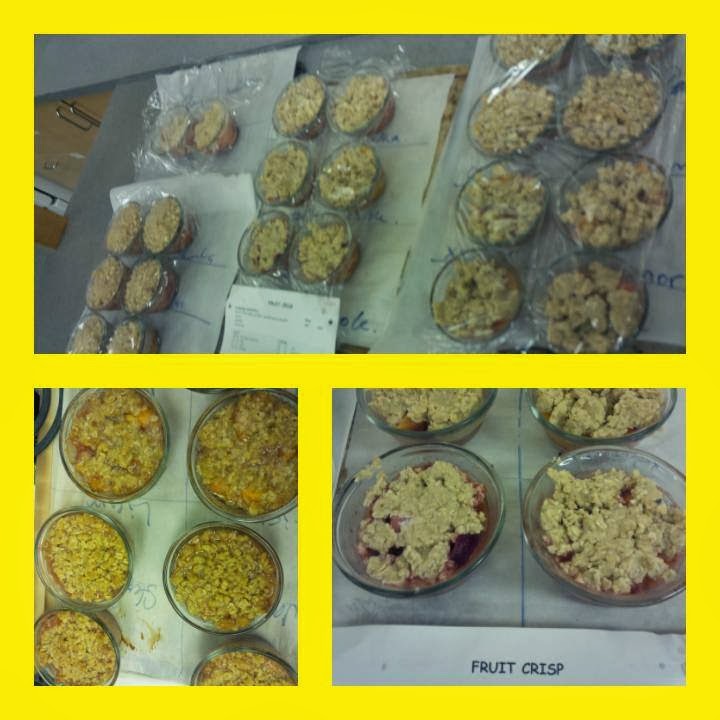 I have to say that these fruit crisps look delicious and were delicious.


Posted by MsAmandaLong at 19:32 No comments:

These can be a good way to help your students learn easier. If you use them as pop-up quizzes at the end of a presentation, chances that students remember what the course was about raise considerably. You can find a tool to create complex online quizzes that will answer all your needs and results will probably improve immediately. Working with custom made quizzes is easier that to search for ready-made ones. Online quizzes are a great way to keep your students focused, to evaluate them and offer them the chance to test their assimilation capacity.

Feedback forms can be a great chance to find if your tactics actually work. Feedback is a great way to find what students actually think of your course. The odds that they will fill such a form are higher if you allow respondents to remain anonymous either if you have personally met them or not. You can focus on data and put your efforts in finding what is relevant for improvement of your online course.

Surveys have a lot of applications in the classroom. Use them to discover the general opinion of your class, to learn about new trends and better adapt your teaching style or prepare new courses. Online surveys will generate statistical data that can help you reach further and understand the needs and requirements of present and future students. These are perfect for research, especially if you desire to create a new course and test the water to see if there is a demand from students.

Conduct regular voting and let students participate in decision making. For example, let them choose the projects they are about to do or the topic you will discuss on a special lecture. There are many variations, the important thing is to enable them to feel they are actually part of the course you are teaching and that their opinion actually matters. If you don’t have the luxury of adjusting the course as you go, you can add ratings to your course with grades or rating stars to learn an immediate reaction of your students.


Read More at Source
Posted by MsAmandaLong at 13:35 1 comment:

Les Leyne: Snippets of testimony in teacher case are bad for Liberals
http://www.timescolonist.com/opinion/columnists/les-leyne-snippets-of-testimony-in-teacher-case-are-bad-for-liberals-1.847953#sthash.CZxZSpk8.gbpl